Dr Leanda has been disappointed at the prolific number of introduced species she has encountered on her travels thus far. Tallies for goats, cattle, cats and foxes far exceed that of native species… but far be it for Dr Leanda to focus just on the cute and fluffy animals. Buffel grass muffles the otherwise majestic landscape of the Pilbara. Attitudes vary heavily based on whether one is sitting in the pastoral side, or the conservation reserved side of the barbed wire fence. Dr Leanda hates all invasive weeds with fiery passion, as it tends to anguish and/or extinguish her trapdoor spider compatriots.

ANYWAY, Sandfire was a good place to stop – cheap and easy. The roadhouse hosted a mango tree orchard that hosted screeching flying foxes that hosted much guano (A video that fully captures their screeching may be uploaded in the future).

Canine Indi cannot usually jump onto the bed herself, but was highly successful just after recovering a large amount of guano on the ground and transferring it to herself. What an achievement.

To be fair, it could have been peacock poop too. They were proudly strutting their stuff, while begging for food stuffs.

Certainly was not camel poop. Though, they were around. On the pastoral side of the fence.

Canine Indi was too tired to drive after being thoroughly washed and dried, and fell asleep at the wheel.

A very scary thing happened to Dr Leanda when she entered Broome. She realised she had no internet AND no phone reception. Telstra was down in all of the Kimberley according the petrol station lady. The horror.

So she went and did some washing and took Canine Indi for a quick walk.

Dr Leanda wanted to attend the Thursday night markets, but since Canine Indi was not allowed to come, they decided to push on to Willie Creek Pearl Farm.

Now, this place was recommended to Dr Leanda, but it was a highly regrettable decision.

Not to get too bogged down in the details just yet, but as it turns out, Dr Leanda’s beloved Bowser despises even the most shallow of loose sand… Or loves it so much she drowns herself in it?

Knowing this, Dr Leanda was ever so careful on the 35 minute drive down corregated road. Upon arrival, while looking for a place to set up, they got stuck for two nights.

Dr Leanda decided to settle in for a bit. 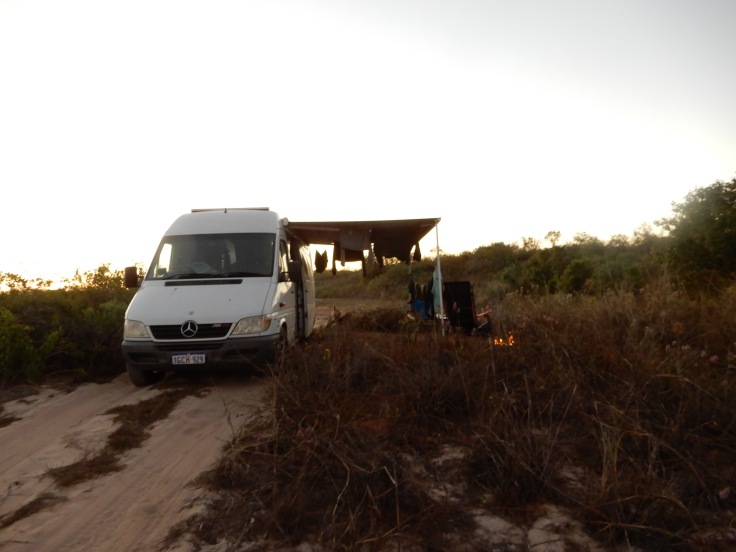 After a whole day of digging, on the second night, after managing to mangle a hose to one of Bowser’s water tanks with the jack, she decided to seek help the next morning. 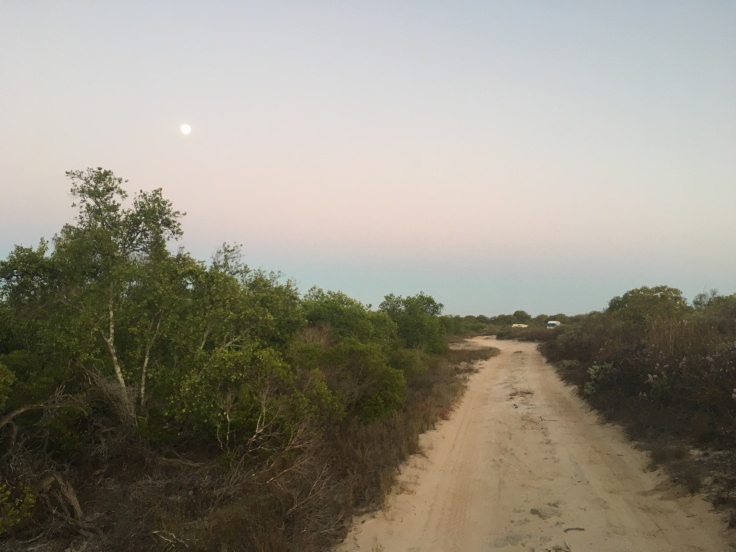 Luckily, it was a pleasant morning walk to the closest 4wd. With many other tracks along the track. How meta. 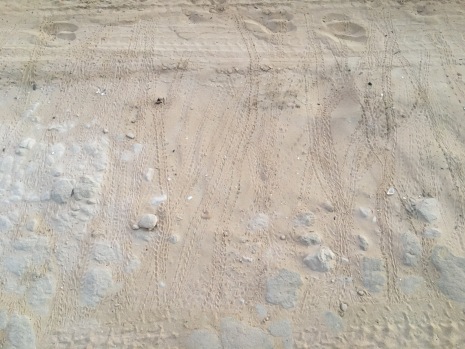 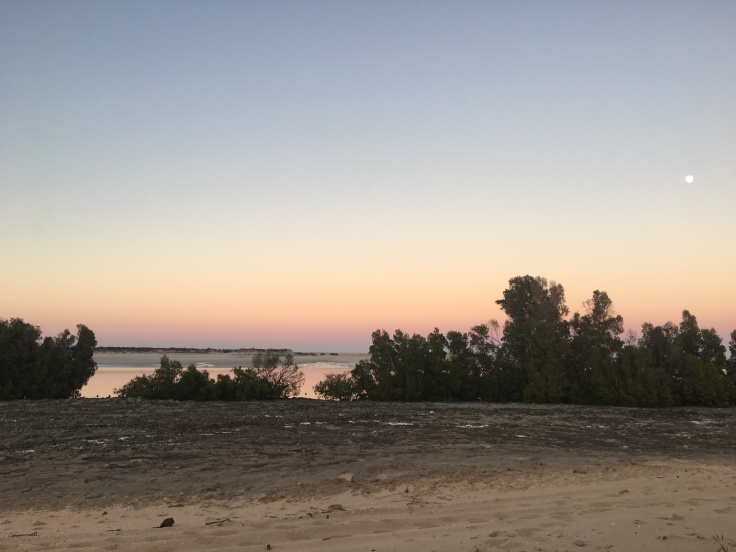 Dr Leanda learnt that asking for help early, may save much stress, time and effort in future.

Fitzroy Crossing Lodge was a truly lovely place to stay. Reception. Internet. Many people with 4wds around. Lots of water. Toilets. Showers. A bar. Wallabies. No sandy patches (Dr Leanda may have been a little scarred by the bogging).

Canine Indi moved on pretty quick after spotting a wallaby.

There was a stand off.

Dinner was fish and chips + ice cold beer from the tap… and the taste of freedom.

Back on the road again, fully revived. Dr Leanda and Canine Indi were in high spirits. 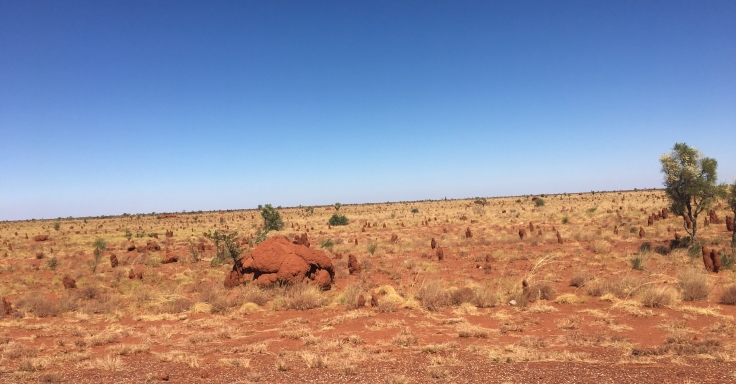 And took in the (other) ancient scenery.

Then they stayed the night near Ord River. No ord-inary river perhaps. They explored.

There were many cool rocks in laying in bed. 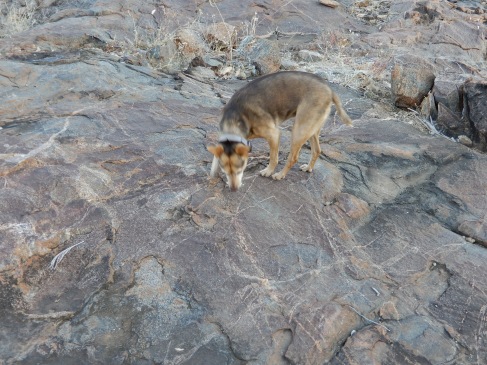 Indi found a rock that blocked what probably used to be the road across the river. 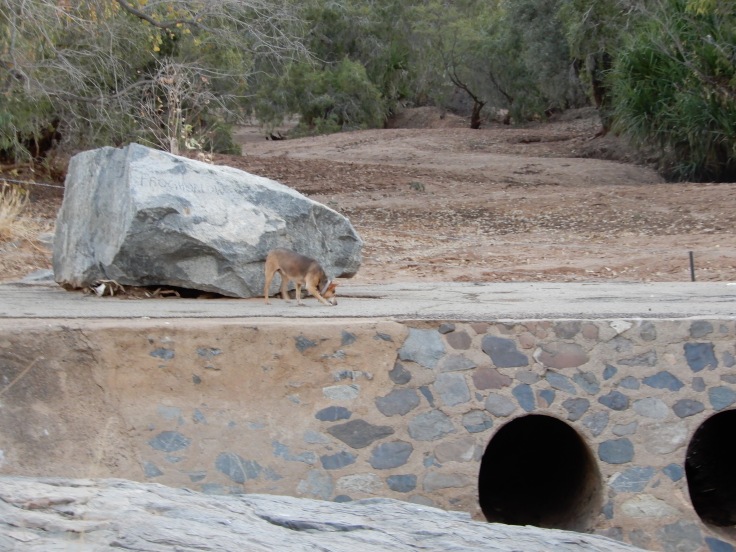 Along the road they traveled, until… a cane(d) toad!

After much morbid fascination, they traveled back to Bowser with the ghost current. 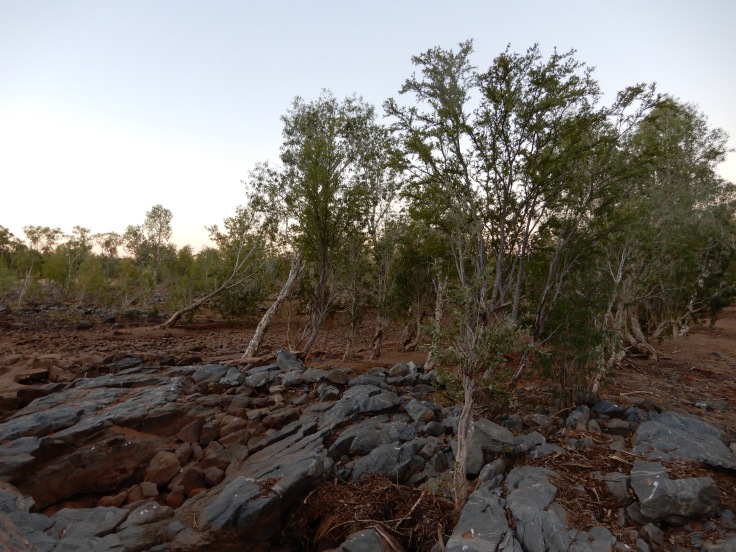 Getting an early start, for a truly long haul of driving, through Kununurra… 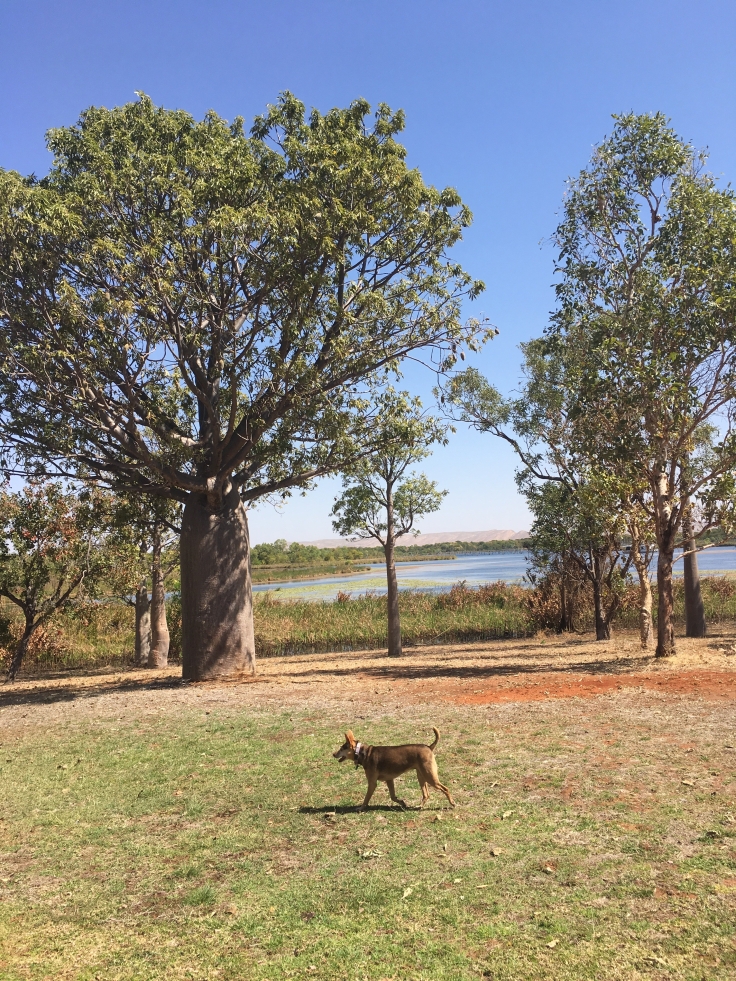 While re-fueling, Dr Leanda found herself agreeing with some postcards… 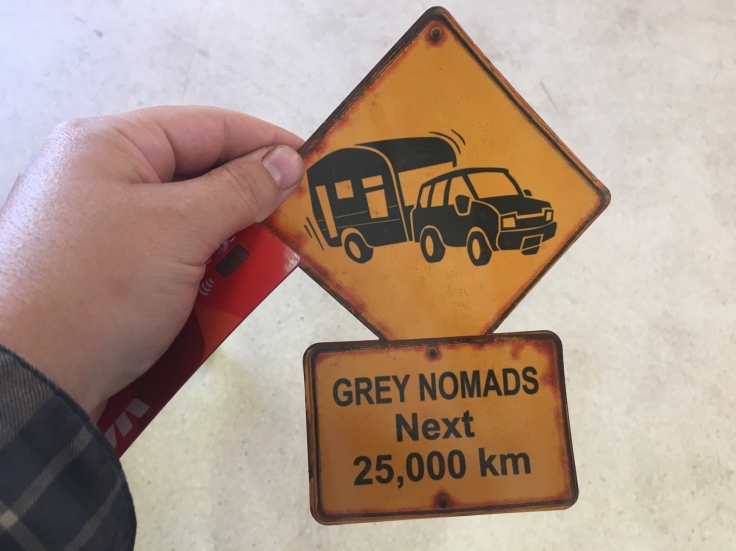 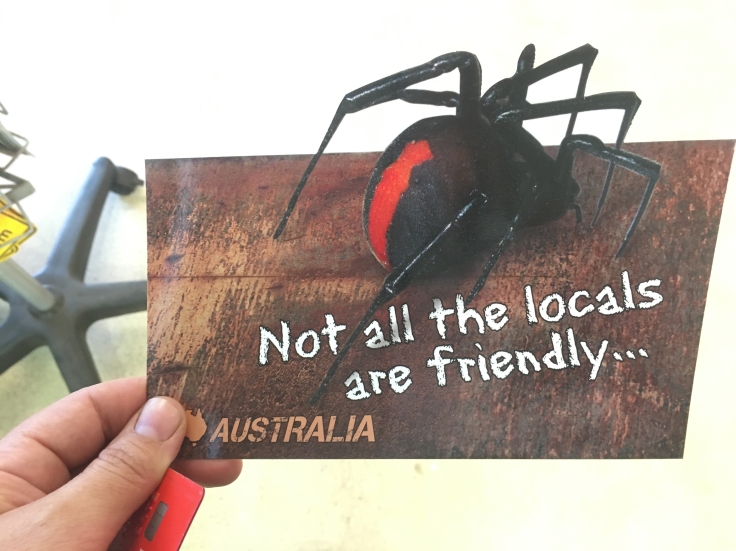 Then over the border.

Canine Indi suggested to Dr Leanda that they pull over at a scenic spot for lunch.

Thinking that she must be hallucinating to hear Canine Indi speak, Dr Leanda quickly agreed. 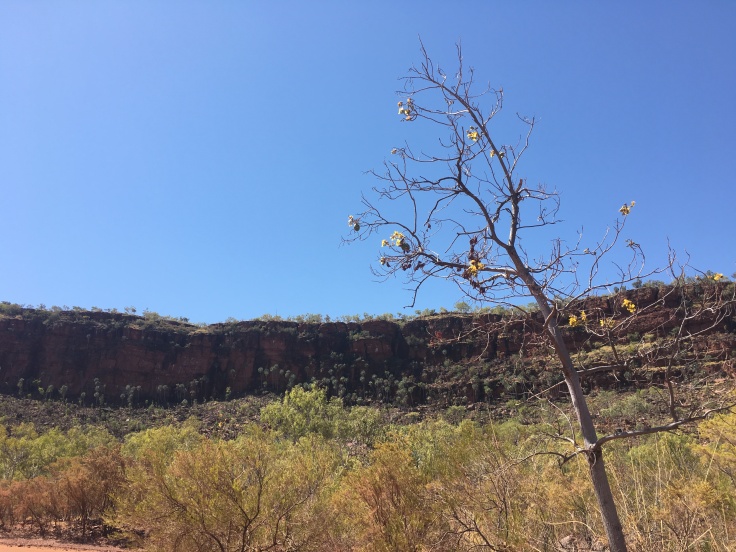 The spot for lunch was at Judbarra/Gregory National Park. Later that night, Grey Nomad Doris told Dr Leanda later that the native tree in the foreground can be harvested for cotton and her grandmother used to make pillows from it.

After a long drive, with little rest, Dr Leanda stayed at a caravan park near Katherine the next night. In between two young families, and a visiting school group. She missed the grey nomads immensely.

Which seemed to have formed by slowly eating the trees.

Canine Indi did not approve of the ones dressed like humans.

Leg 15: Dr Leanda reveals all too much about herself

Some may not know this about Dr Leanda, but she has a distinct dislike of tan lines. As such, she often forgoes clothing when catching rays. After a distinctly terrible caravan park experience the night before, Dr Leanda decided to see if a nudist retreat would be any better. Plus they had free laundry facilities, ironically enough.

It was so much better. Socialising was encouraged, with darts every night, pool aerobics every morning and frequent pub outings.

She can reveal that there was green ant nest was near her camp site. 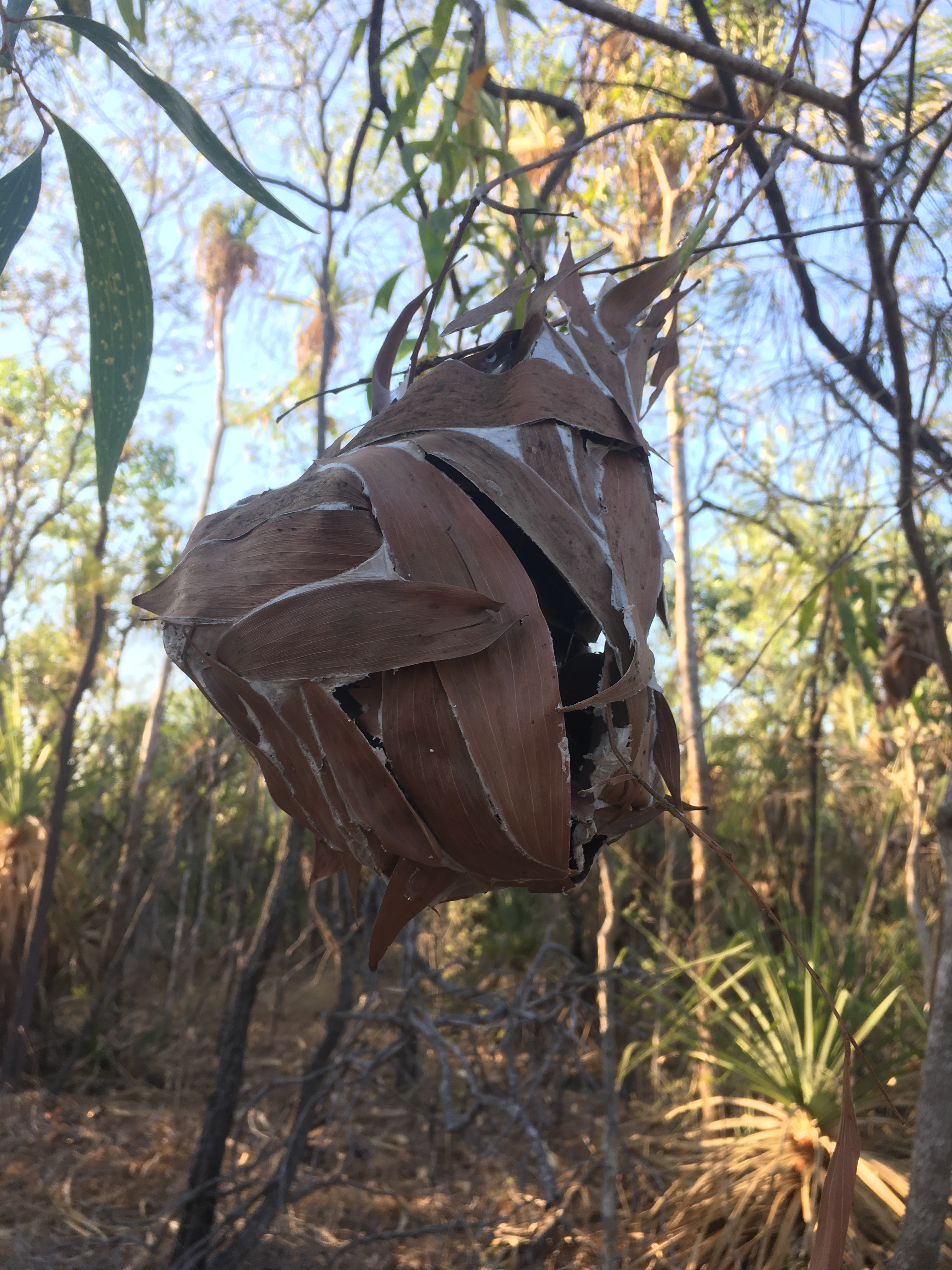 But the site itself was somewhere secret, that cannot be revealed. 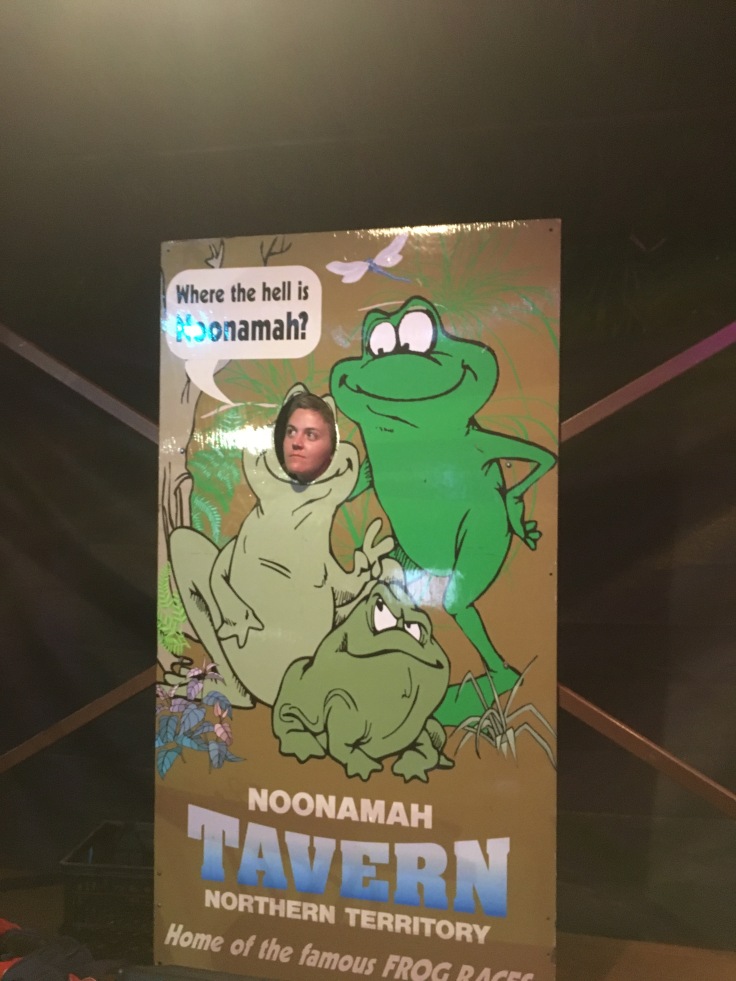 One thought on “3/ Girding Australia”