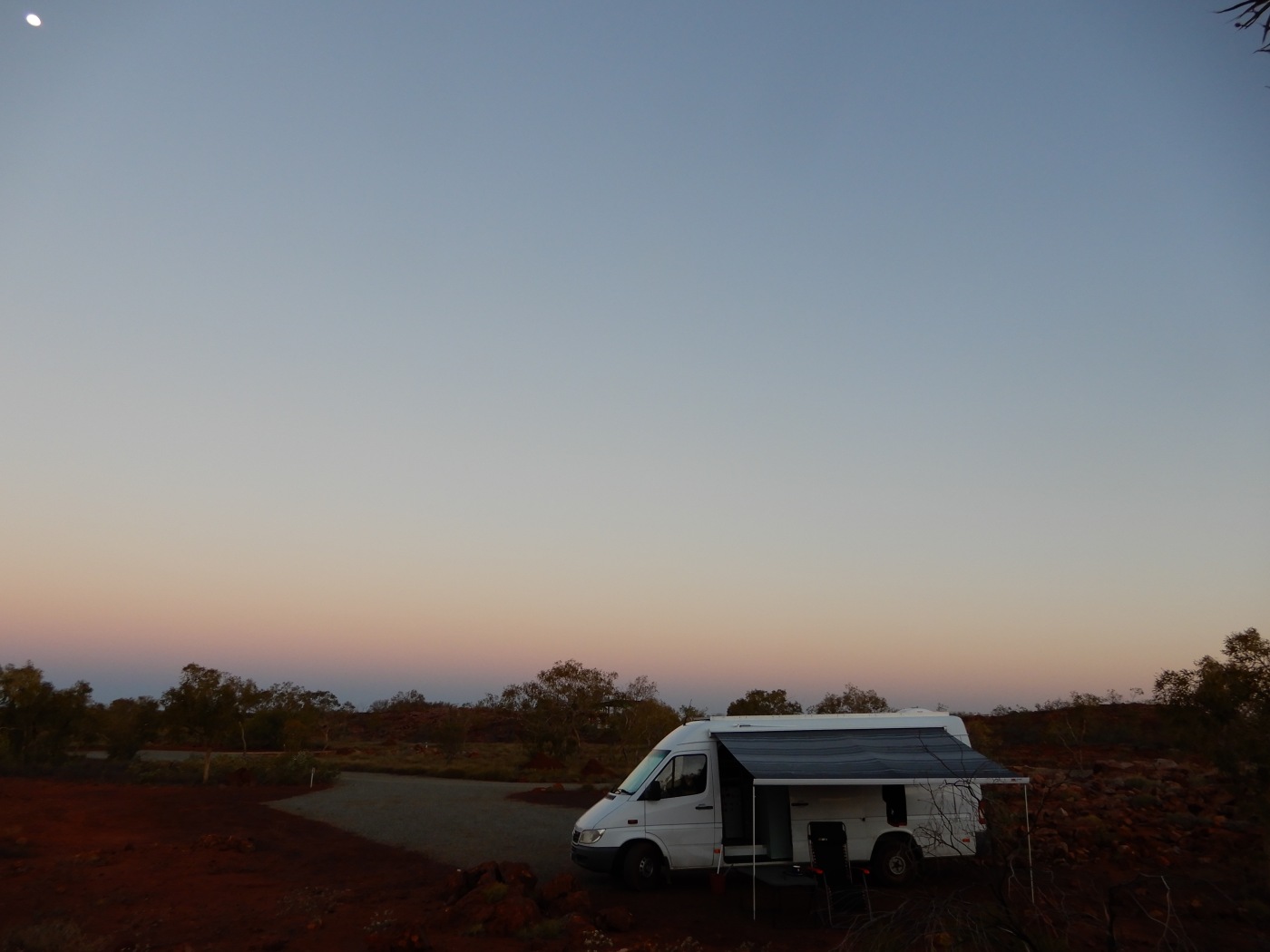 Dr Leanda is mindful of mindless scrolling through previous posts, so with this in mind, she has mindfully started a separate thread. Dr Leanda feels like she has already lost her mind, and is perhaps writing ‘mind’ overly much to try find some piece of mind.

Sandy Cape evoked strong feelings of nostalgia, but northward Canine Indi and Dr Leanda trekked to make new memories. There were a few brilliant sights along the way, and a big favourite was the large crayfish guarding Dongara – any invertebrate statues would likely catch Dr Leanda’s eye stalks. 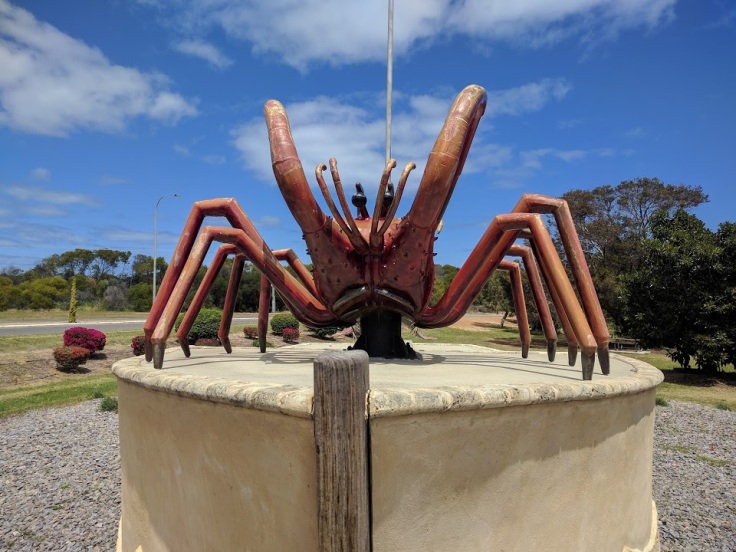 Mind was blown away by leaning trees, and someone intentionally blue it. 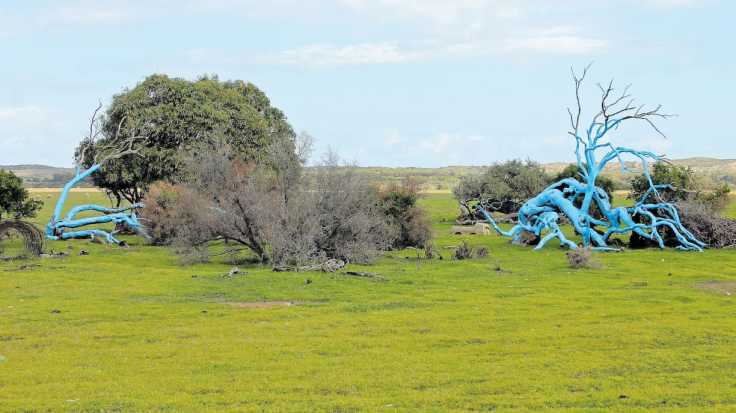 They were painted blue to hightlight blue days apparently – which is excellent, but also excellent that writer of an article reporting this did not shy away from puns.

Dr Leanda had never visited Geraldton before, and was looking forward to seeing a place she had heard so much about… however after seeing a ‘God will save your soul’ banner near the entrance to the town… and then another four Christian crosses before reaching a petrol station, she nearly drove right on through. While respectful and accepting of others beliefs, Dr Leanda also has a slight aversion to Christianity due to a misspent youth at a religious school. *Queerly* they put her on the ‘right’ track.

At any rate, Dr Leanda repented – being aware of her own biases and discrimination – and stayed at Sunset Beach. 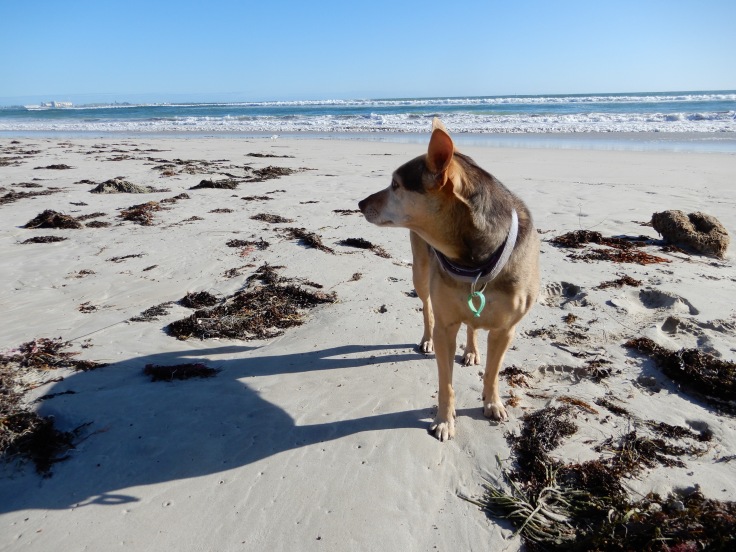 Sunset beach was lovely, and Canine Indi was particularly glad they disem-barked.

The next stop was Hamlin Station and what are essentially living fossils. These sound scarier and more menacing that they actually are, but Dr Leanda nerded out because she is a scientist. She was also so excited that she forgot to bring her camera, and her phone died. So below is an image by Lochman Transparencies, that can be found on the website by Bush Heritage that explain why stromatolites are so cool (Dr Leanda met the stromatolite expert mentioned in the article, and was thrilled to meet someone more nerdy than herself).

Dr Leanda undrstands if you do not nerd out about stromatolites, Canine Indi did not understand what all the fuss was about either, and probably would have preferred to stay in bed.

To feel more accepted in her nerdy ways, Dr Leanda decided to attend the science fair organised by Bush Heritage at Hamlin Station Stay. The fair opened with a welcome to country, and interspersed were talks related to aboriginal heritage. Dr Leanda even learnt some Malgana words for the local critters, but regrets not asking if there was a word for spider. There were many different nerdy (western) science talks to enjoy, and she learnt much about the local seagrasses, sandalwood projects and other conservation initiatives – including a catchy tune about Dirk Hartog Island (Wirruwana). Above is an absurdly brief recount, but Richard McLennan, a Bush Heritage employee, PhD student (an excellent retirement venture if you ask me!), and all-round top Aussie bushie, said it best in his blog.

Dr Leanda had high hopes of reaching Carnarvon on the evening of the science fair. However, she responsibly pulled over and slept somewhere on the side of the road. It was not a good sleep mind, as what could have only been a goat kept her awake until she realised it was, in fact, a goat. She was more scared it was a human. Funny world we live in where we are more scared of our own species… anyway not all was lost (though much sleep certainly was), as she took a nice piccy of a nest. At some point she plans to crop it and photoshop to make it look even nicer.

So far so good driving in Bowser – she was particularly protective of occupants from goats, or so Dr Leanda herd. But because of her bulk, she cannot squeeze through drive-ins. Having had a craving for a hot chook since Geraldton, Dr Leanda decided to Chicken Treat herself and Canine Indi. They did, after all, a great deal of time just walking around Carnarvan taking in the sights. Including The famous Dish (not Dr Leanda’s photo).

Dr Leanda’s favourite part was an art installation in the middle of the main strip, that was an iron silhouette of a man drinking a beer. At least, she assumed it was a beer and not something less manly… otherwise he might’ve been *cast* out. Dr Leanda somewhat Fe-verishly made many more puns on the subject, but deleted them, being ever so mine-ful of her audience.

Being quite attached to sleeping in fully-equipped Bowser and not having to pay dues, Dr Leanda camped the night at Yalabia Rest Area. Nestled in amongst the grey nomads, no goats bothered her and Canine Indi that night – they even got some nice photos of the dry river bed before sleeping off all that hot chook! 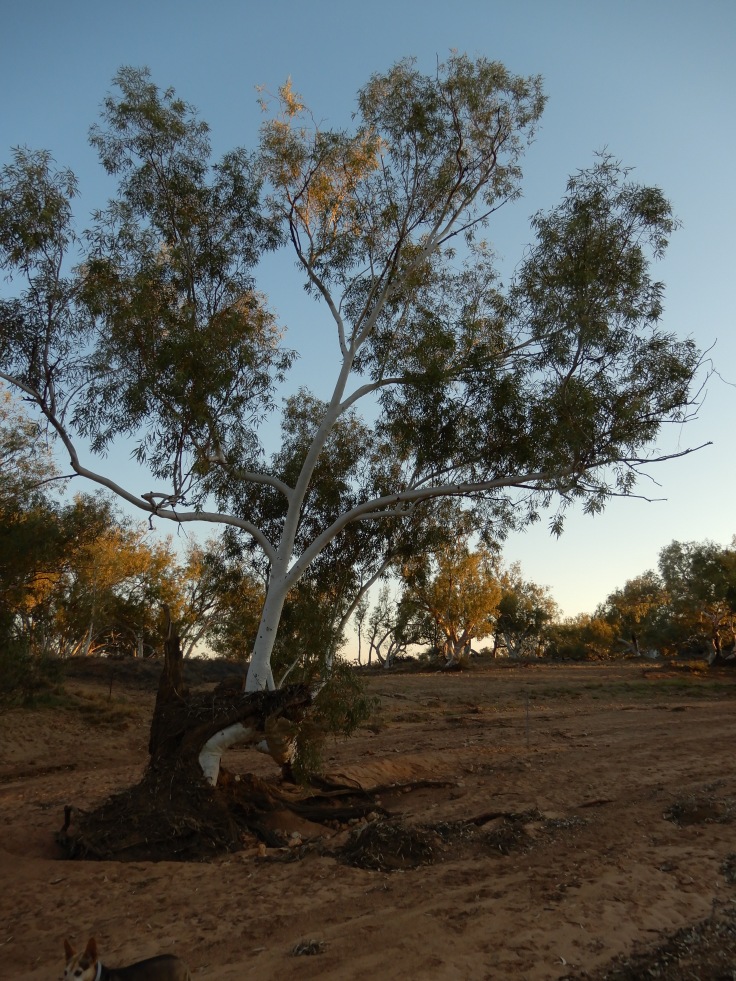 Canine Indi is always true to her nature. No sooner had the pair stopped for lunch at a rest area near a nice looking river, that Dr Leanda realised her mistake. It was hot, Canine Indi was a dog, and there was an inviting water body to cool off in nearby. She sighed deeply, knowing the inevitable, and got changed into an old pair of shorts.

They continued to explore.

There were some flying insects. A parasitic wasp with spider prey in tow was videoed, but not (yet) uploaded. Dragonflies were mating on the fly too. They found one taking a breather.

Then they found some interesting structures underneath a rocky overhang.

‘Bird nests!’ Dr Leanda informed Canine Indi with great authority. But, she was not at all certain what kind, and actually had little authority on the subject. Canine Indi was not listening anyway. She was too busy getting even muddier.

Luckily, they were staying at Peedamulla Camp that night where Canine Indi had a hot, soapy shower. She didn’t want to come out of the freshly cleaned Bowser after that either… 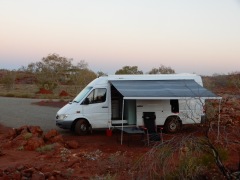 Yule River was an excellent place to camp. Dr Leanda loved it because she could almost fully embrace her inner hermit… unfortunately (or perhaps fortunately), she could not do so as grey nomads were beyond eye-sight but still too close to feel completely alone in the wild.

Canine Indi loved it because there was much walking and sniffing of interesting smells.

Perhaps all the animal tracks?

There were many birds. Dr Leanda tried to take photos, but blurry feather balls were the results. 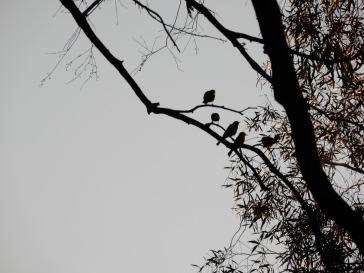 The sunsets were nice though. 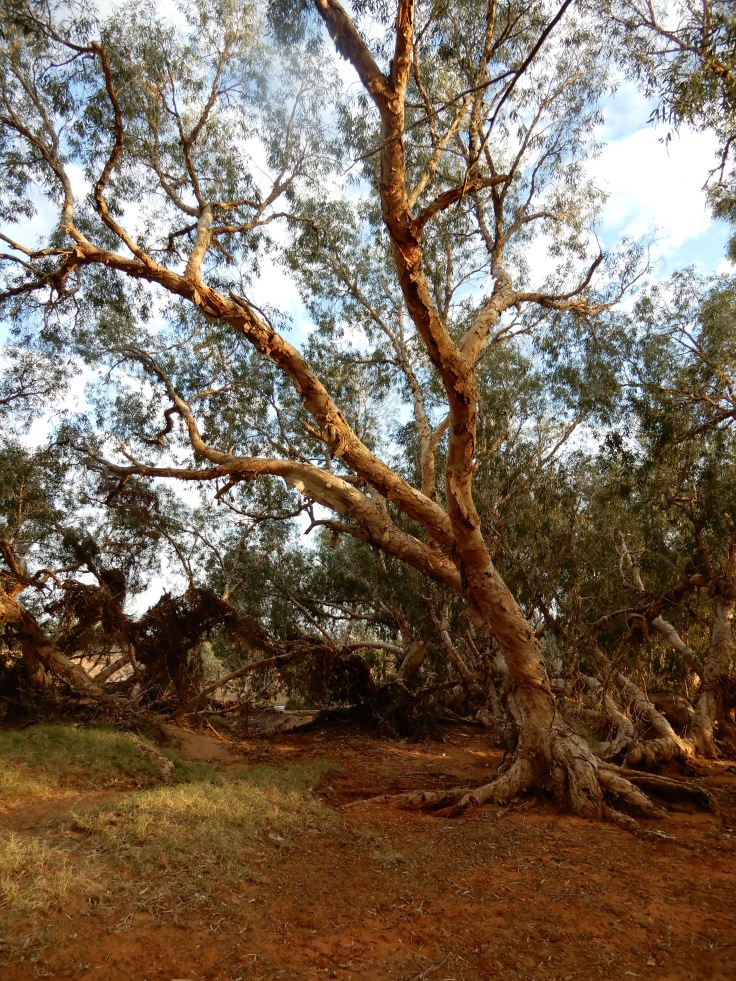 Yule love the next installment for sure!

One thought on “2/ Girding Australia”